Best Boots Hub is supported by its audience. When you buy through links on our site, we may earn an affiliate commission. Learn more

There’s nothing far much worse than a cold weather that attacks your feet with vehement vengeance. And yet given that winter will come without fail, bundling up for the season is the only way to protect yourself from the chilly outdoors and frostbite attacks. In fact, with the right type of footwear, your feet can stand up to the arctic condition and stay warm from the start to the end of winter. 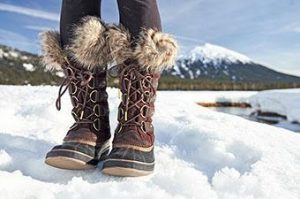 Winter and snow boots are the most suitable for the cold weather. At least, they have the features that, in a way, keep your feet warm enough for maximum comfort.

On the surface, though, it’s easy to assume that both offer the same level of value because their looks are synonymous. That couldn’t be farther from the truth. In this guide, we’ll do a snow vs winter boots teardown, teaching you the differences and similarities between the two so that you can make informed purchase decision before the cold season attacks with vehemence.

Are Winter Boots the Same as Snow Boots?

Winter boots features shaft raised a few inches above the ankle to keep snow and ice from getting into the footbed, but snow boots have shafts too short to offer that kind of benefit.

One thing the two types of boots have in common is that they can keep you warm in the cold weather, although the level of insulation in each does vary quite significantly.

As you can already see, there quite some differences between these boots as well as a similarity that makes the both of them quite significant.

So let’s look at these even further.

Snow and winter boots are similar in that they both can keep your feet warm. Even when temperatures fall below zero (and it will), these boots should help your feet stand up to the cold and keep moving.

For what it’s worth, snow and winter boots have some kind of insulation that retains heat within and, at the same time, create a shield that bars cold air from soaking into the inner parts of the shoes. This insulation is in the innermost layer of the footwear and does a great job.

One thing you need to keep in mind is that boots’ insulation will never be the same. And the level of warmth for winter and snow boots isn’t an exception either.

You can’t use winter boots in the snow because they’re not warm enough or waterproof to keep your feet cool and dry. In other words, if you’ll be spending time outdoors in an environment likely susceptible to extreme cold and snowfall, you don’t want to be walking around in winter boots unless you don’t take frostbites seriously.

Winter vs Snow Boots: What are the Differences?

There are a number of differences that set snow and winter boots far apart. And it’s important to know them so you don’t get confused on what option to pick.

Snow boots excel in extremely cold conditions because of its superior construction. Snow boots feature a waterproof lining that bars water from soaking in. The waterproofing layer starts from the toes, run through to the heels, all the way to the shafts raised above the ankle. That means an all-around protection from snow that’s a few inches higher than usual.

Winter boots, too, have a great deal of a construction. But the lack of a waterproof membrane makes them duff in snowy environments. So given that they don’t have the water-resistance power that snow boots have, it’s best not to use winter boots when it’s snowing too much outdoors.

Snow and winter boots both feature an insulation lining that retain warmth in the boots to keep your feet at room temperature. However, the insulation levels are different, with what you get from snow boots being higher than what winter boots have to offer.

Thanks to their higher level of insulation, with a tight seam-sealed design, snow boots can keep your feet extremely warm. Combined with the right outfit for the season, you can enjoy the glory of the outdoors without ever having to worry about the harsh, chilly weather.

Winter boots don’t have a dense insulation. And while this is an advantage to those of us who need lightweight boots, the kind of warmth you get is far less to equate to the warming intensity of snow boots.

As warm as snow boots are, they aren’t the lightest footwear you’ll come across. You’re getting warmer boots, but that’s so at the expense of additional weight that your feet will have to carry along with every step.

Manufacturers measure insulation levels in grams in the range of 200 and 2,000. The 200 grams is the least in the market and it best suits those who live in moderately cold environments. The 2,000 grams of Thinsulate are for those who need more warmth.

But what’s the big deal exactly? Well, the problem is with the insulation itself.

You see, every gram of insulation adds to the original weight of the snow boots that you buy. So if your boots weight 2,000 grams with 500 grams of insulation inclusive, it means the 500 grams is additional weight.

Yet owing to the fact that you do get sufficient warmth to enable your feet stand up to the cold weather, especially in areas where arctic conditions can be so extreme, I think the additional weight is worth the bargain.

As you can see, snow boots are not the same as winter boots. Snow boots are good for extremely cold and wet conditions because they’re waterproof and insulated. And winter boots are the kind you should put to general use.

I hope this short comparison helps you to make an informed decision on whether to get snow or winter boots depending on where you live.